Let me preface this by saying that I loathe being ghosted. I think ignoring someone is WORSE than being rude. I prefer my LEAST favorite emoji, to silence.

and I hate that shrugging man.

I also hate hurting people’s feelings. … …. so ghosting is a convenient way to deal with the unsavory Tinder dudes without having to tell them why.

Is it really ghosting them if you haven’t even met them yet?

Yeah… it is. It’s rude to go from answering someone to not, regardless of the reason. I didn’t think I had any other choice with Tinder James once he started calling me honey… So I set him to silent and fell in love with the little moon beside his name that gave me my peace back.

Or so I thought.

What part of my not responding for a week, gives the slightest suggestion that I may still be interested? I honestly want to know, because I feel worse with each message from him that I ignore, and he’s not slowing down. Then he started calling. Ugh. No. It’s a very rare occasion that I take a phone call. So I asked Little Red for help. She told me to send him the little ghost emoji. My coworker disagreed and told me to keep quiet… but I always listen to Red.

He didn’t get it. Ugh. I already felt like an asshole… and now I have to explain my insult. Fun. 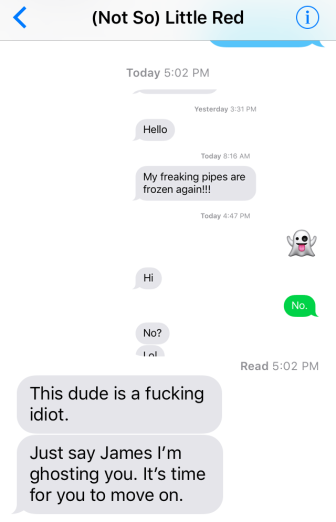 My coworker says “don’t be too mean” and it resonates because I have a son, and I hate that men have to stick their necks out so far in order to impress a girl. We put all the same pressures on them AND they have to be the one to ask. It’s not easy being a man and I never want to damage a good one.

For the record, gentlemen… when she really likes you… nothing is anything short of perfect. Perfect bodies are a perfect nightmare, because having a man want you naked, regardless of your imperfections, will burn your fucking house down, sexually. Not giving a shit about perfect, frees you up to have scorched earth sex. Get some, you’ll thank me.

Because the rest is just cringing and ghosting until you decide to be honest and tell someone why you’re running scared instead of smiling when his messages roll in.

Who wants to bet he doesn’t handle it well?

I did not need to take bets on who knew I would respond. It goes with the territory. Every basic man in the world knows that women are most insecure about their weight and appearance. Fat and ugly would have crushed me in my 20’s, but now I just feel like clarifying that I only swiped right because he was in high-vis and I was at a weak point in missing someone far more attractive. Don’t come for me unless I send for you, Tinder James.

Because I have teenagers.

Teenagers that know stuff. I was talking to Red and she stopped me.

Sorry, Stalkerpants…. you’ve been thrown to the wolves. I apologize for whatever fun adventures they leave you waiting on, but hopefully you learn how to speak to a woman as a result. It’s ok for someone to not want you, and when you’ve shown your ass and woken them up in the middle of the night AND first thing in the morning on their day off…. you kind of .. sort of…. need to just apologize and fuck off. There’s really no other solution.

Well… other than learning the hard way….