This is one of the hardest dates I’ve ever had to force myself to go on. I don’t generally date anyone that lives in the same town as I do, so that I don’t have to avoid them when things fizzle. There’s a far more attractive population of men within a half hour of me, so why spoil my own swamp by entertaining a local perch? No thanks.

Dallas took me by surprise and off guard, within a few feet of my smallest child. I NEVER mix motherhood and dating so this was already murky before I sat down.

He’s a nice person with a terrible ex-wife. It seems to be my type so I don’t even bother balking over the idea of a meddlesome, spoiled woman junking up my social life. I’ve made peace with being the nice ex and figure I’d rather date the same. I can slay a lady dragon better than most because I’m disarming and difficult to hate. We’ve spent the last few days texting back and forth and shallowly… I love his grammar. It may seem silly, but smart men restore my faith in humanity and I’m a little short on hope these days.

I met him for dinner at the only restaurant I didn’t know anyone, in hopes that I could fake my way through dinner and be home by 9. Not at all in the mood to make pleasant small talk and desperately hoping my eyes weren’t still so puffy. I’d spent the night before crying, laughing and canning with Anthony… with too many martinis to count. I didn’t have a hangover, but still felt hollow and hopeless. Not a great frame of mind to be in when you’re trying to charm someone.

He was late, something I don’t love on a first date but who are we fooling… at this point if he doesn’t walk in wearing an ankle monitor, and carrying a severed head, we’re ahead of the game.

He’s tall, dark and average. I’m trying not to be disappointed and weepy, but I just want to go home. This is why you don’t date when you’re devastated. It’s impossible to have any success at all when you’re wallowing in your failures.

D- You are stunning, and it just got a lot better.

He has nice teeth and hands, with the faint dent of a wedding ring still noticeable on his ring finger. I took my captivity band off in 2003, so it raises a small red flag.

In my opinion, men are WORTHLESS for a year after divorce. Trust me on this one. If you’re a homewrecker and bypass that bad year, you deserve the bad time that’s coming for you later. You have to let the sheets cool, the hatred fade and the first few awkward sexual experiences happen with someone else. Fast tracking a divorcee into a relationship is an easy way to ruin your life.

He goes straight for politics and is well-spoken and informed. He’s a bit of a salad-bar voter, like me.

J- Both. I’m a big fan of feeding hungry kids and killing off the criminals, faster. I’d like to think I’m well rounded.

The server approaches to ask if we want drinks and he smiles and says the best thing I’ve heard all day.

Bubbles make me less awkward and it’s almost the same as having my best friend, Miss Fancy, sitting at the table with me.

D- So tell me. How in the world are you single?

I hate that question. How in the world do you answer that?

D- I should tell you about Marcy, my wife, errr EX-wife. 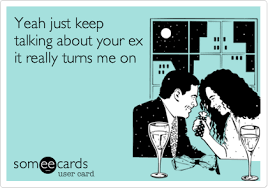 Sigh… No really… you shouldn’t… but here he goes. He took me through their dating life in college, early married life, kids, and every, last, miserable detail of their divorce. He ranted about what a hateful bitch she was for a few more minutes then reached across the table to hold my hands. Ugh.

This is why you don’t date them the first year. If he doesn’t have time to fix the shit that went wrong with her, he’ll just bring the same bag of garbage into his relationship with you. WHILE torturing you with the details of it all.

Dinner was delicious and he was nice enough… but my goodness it’s uncomfortable to date someone who isn’t ready.

He got a little tipsy and suggestive towards the end of dinner and I opted out of dessert.

I ducked my way out of his attempt of a sloppy car-side kiss goodnight, and was on my way home by 9.

I’d spent yesterday working myself sick. I harvested potatoes, onions, shallots, cucumbers, tomatoes, tomatillos, beets, kale, swiss chard, pears, apples, plums, …. ugh…. pumpkins and more. With wind whipping around me, snow smacking me in the face and branches down everywhere. It was a day full of second guessing my standards and being pretty much open to anyone with a heartbeat and a deep love of carrying firewood.

One date is all it took to remind me again who I really am.

I found my axe and chopped some kindling, stacked a bunch of firewood and made the first fire of the season in the fireplace. I decorated the mantle with terracotta pumpkins and fluffy white ghosts for Halloween and got out the knitting I never have time for.

I declined a second date and deleted Tinder entirely.

I’m a fabulous date and I enjoy my company immensely. There’s always great food to eat and a warm inviting space to enjoy. I’m funny and nice with no creepy hangups or hidden spouses.

I’m a hell of a catch… but there’s no point swimming around with a bunch of perch when I only want a salmon.