Another Beautiful Day In Chaos

The high cost of help

Admittedly, I like to do everything myself. It’s not that I’m a control freak, I just know that people rarely do things without expectations and I don’t like being beholden to anyone.

But…everyone has their breaking point and we’ve gotten two feet of snow this weekend. My right elbow is angry and screams loudly with every heavy shovel full. To say I’m exhausted is an epic understatement, and the snow just continued to fall no matter how many times I went out and cleared the driveway again.

I woke up at 3 AM on Saturday morning and looked out to see a foot of fresh white fluff, with semi-snowballs falling from the sky. Oy. I knew the longer I waited the harder it would be, so I got up… got my snowpants on over my pajamas, zipped my down jacket over the stretchy white sports bra I’d been snoozing peacefully in, and went out to face the reality of my painfully single life. I swore I’d never miss the Dirty Boat Stealing Hippie, but damn it I wish he were out there helping.

It wasn’t terribly heavy… but my driveway is long and I have to keep the parking area large so I can turn around and so that someone else can park beside me. That’s a lot of fucking snow. I was overwhelmed in minutes just unearthing my car, so I headed down the driveway to start on the easy stuff. The guy who plows my neighborhood is extremely kind and tries hard to not leave me a huge berm at the end of my driveway. It was still intense and I wanted to go back to bed. I looked up to see a truck slowing down and the window started to inch down as well.

S- Heyyyyy! I was just out for a cruise and figured I’d cruise by and see if you needed any help shoveling!

(A little history. He dated my little sister a few years ago and when I saw on Facebook that he was doing snow removal this winter, I contacted him. He was more interested in doing me. I’m NOT interested for a multitude of reasons, first and foremost “Thou shalt not touch anything your sister has touched with her vagina.” Period. I made it clear after he wouldn’t stop texting me, he got slightly offended but went away quietly. Until now.)

As in 3 in the freaking morning. Nevermind the creep factor of him just driving by.

He pulled over, hopped out with a shovel and started helping. Ish. I was shoveling while he talked and frankly my podcast was interrupted and I was more focused on getting it done even faster now, given the chatty helper.

J- It’s ok, really- I can’t afford the help right now or I would have called.

S- I’ll let you buy me breakfast tomorrow. How’s that?

I should have said no… but fuck… my elbow was crying and he was willing.

Two hours later, I sent him away and walked in to my little Dumpling waking up. Oy. I got us both ready and we went to breakfast, thankful for my favorite local Mexican place that makes killer burritos and doesn’t have an iota of romance. It was awkward enough as it was and my little lady expedited us out of there pretty quickly.

I left with a wave and he was calling my phone before my seatbelt was buckled. NO. I hate phone calls. There’s only one man whose calls I answer and he knows I hate them so he only calls if it’s absolutely necessary.

Which is when the text message came chiming in, just to make the regret kick in faster.

I sent back a curt, thanks but no thanks and resigned myself to shoveling my own snow, eternally.

It’s immeasurably frustrating to get a text from someone you are not attracted to or interested in when you just wanted or needed a little help. It’s a reminder to always pay for the help I need, because this shit happens ALL THE TIME. I’ve had a plumber, electrician AND tile guy all hit me up for a date after hiring them. For the love of Jesus, can’t a girl just get a little home improvement help without a dick waving back?

I went to lunch with my Fancy best and soaked up all the normal charm of being around her and her Fancy guy. Their relationship is the ONLY reason I continue to have faith. Normal is so fun to be around and healthy commitment is damn inspirational. I finally figured out that it’s the reason I fell so crazy in love with my favorite guy. We have so much fun together in the best and worst of times. Easy laughter and scorching hot sex goes to my brain, what can I say? If it isn’t that, I don’t want it.

We drove home and I shoveled another 6 inches of bullshit out of my driveway, trying to find the silver linings in the snow. I made a fire in the fireplace and hot cocoa for the tiny one while I wrapped a heating pad around my poor elbow.

Which is when more text messages from the stalker with a shovel, came chirping in. Ugh. 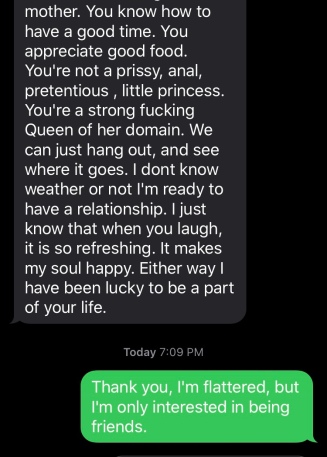 What do I have to say exactly, to make my NO a little louder? I thought about telling him I’m seeing someone but I am too damn old to be making up imaginary boyfriends. I thought about not answering at all, but he knows where I live and the only thing I hate more than phone calls are surprise visits. I could be brutal and tell him he’s too skinny… but that’s a dick move and I don’t want to be the reason someone puts on 50 pounds when I still wouldn’t touch him with a ten foot pole.

So I was nice… and went back out to shovel…. cursing myself a little for accepting his help when I knew full well that nothing is free and dudes who drive by in the middle of the night are up to no good.

Lucky me. 🙂 I think it’s time to splurge for a snowblower.